First of all, how promised, here the report about the struggle day in Yeosu.
On Friday the reporter got the possibility to join construction workers and other members from KCTU, Gyeonggi Regional Council, on their trip to Yeosu, to join LG Caltex unionists’ struggle rally. On July 15 unionized LG Caltex workers begun a strike for 5-days work week with full compensation of wages, it means the same payment like before, changing the status of irregular workers to regular workers, better payment for them and better work conditions for all workers there.
The government immediately declared the strike an illegal one and set the strike and union leaders on the searching list. Later four of them were hiding on Myeong-dong cathedral’s compound in the tend complex of MSSC.
After 6 hours ride to there we arrived right on the opening speech. Thousands of workers, in the next 30 minutes the crowd was increasing up to at least 5.000 demonstrators, already were on the spot. The rally took place directly in front of the main gate of LG refinery, heavy guarded by riot cops. Beside many construction workers, activists of family member committees and KCTU members from all over S. Korea 700 wanted (by police) LG Caltex activists participated.
In strong speeches, speakers from KCTU, like the president Lee Soo-ho, leading activists from KFCITUcolor> (construction workers union), Democratic Labor Party (DLP) and the wanted leader of LG Caltex Union demanded the fulfill of the unions claims.
Of course like on all workers rallies a powerful cultural program was presented. Aside from well-known singer Park Yoon Sori Taraecolor> a music group from Daegu performed great struggle songs but also traditional music such as “Arirang” in a real powerful version – filling thousands of workers with enthusiasm.
After that event a majority of participants of the rally want also to show that they not only know how to use language for the struggle. They just wanted to tear down the heavy steel fence, surrounding the whole LG grounds. And, despite the heavy defense of the riot cops, at least 3.000 were in action - they did, including the meters high concrete posts. And the cops just were hiding in the bushes using water canons and thought by using this means they were able to stop the crowd. But because the really ugly heat cop’s water canons only gave the fighters more power by providing welcoming refreshment. 감사합니다!!color> 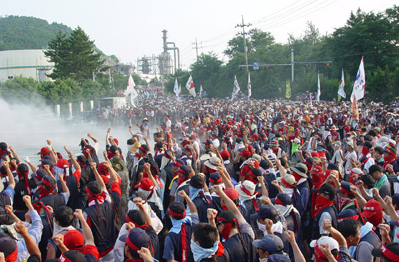 After all a real great rally, just displaying the real power of the working class – if we struggle united. Also very impressing: the rally was guarded by (irregular) construction workers (please pay attention to the fact that the LG workers are regular workers!). SOLIDARITY IS OUR WEAPPON!color>
Herecolor> you can watch a video and herecolor> read an article about the rally and the fight. By the way: the trip to Yeosu was only possible for the writer because of the solidarity of KFICTU (Gyeonggi Branch).color>THANX A LOT COMRADES!!color>
Remarkable also the fact, that on the rally the issue of anti-war and the opposition to the government’s plans to send additional 3.000 combat troops to Iraq was one of the main parts in several speeches.
Impressed by that of course it was exciting to see what will happen on next day’s anti-troop-dispatching rally in Seoul.
Arrived Saturday evening in front of Kyobo Building to join the rally against the troop-dispatching plan, perhaps you can imagine the disappointment to see only around 1.500 people gathering there. 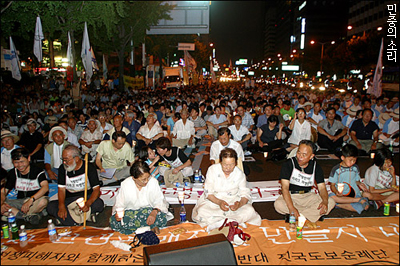 Mainly Hanchongryeon members and DLP activists waved candles (!) and shouted slogans (herecolor> you can read an article in Korean). Groups/organizations usually big-mouthed about anti-war, against the occupation and troop-dispatching plan – just absent! What they, but also KCTU, think how to stop this? Just by holding speeches, organizing forums and stuff like that? Acting like that, beside the troops will be sent, is risking to break the movement before it had the possibility to grow up.
They are thinking that the ongoing hunger strike – hunger striking DLP member of NA Kim Hye-kyeong had to go to hospital (read Korean articles herecolor> and herecolor>) of political and human right activists is enough?? That the rulers are deep impressed about such activities?? MUG’S GAME!!color> When they will realize that only the power from the streets can force the rulers to give up their plans?!


Here some commented and uncommented impressions from Yeosucolor> 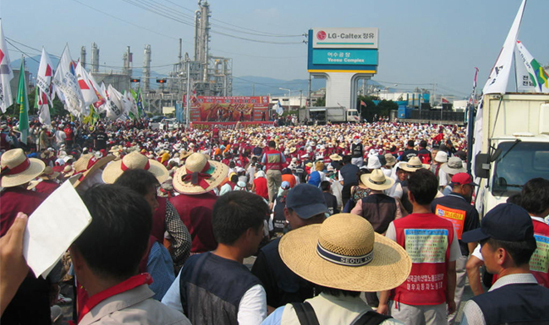 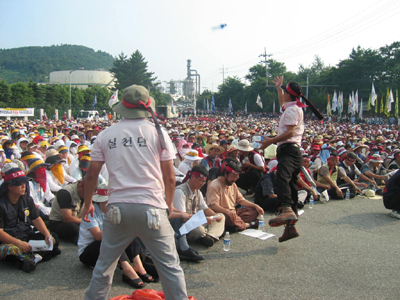 Water, at that time just in bottles, for all! 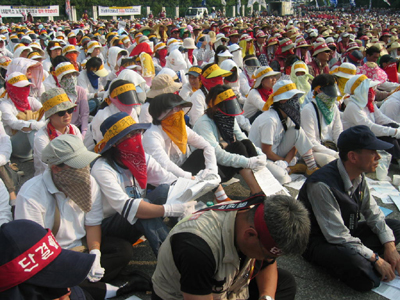 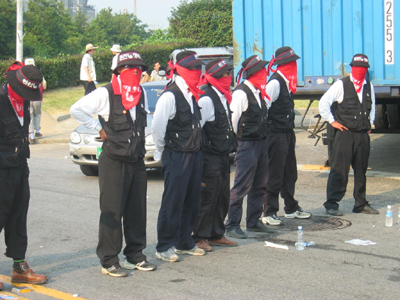 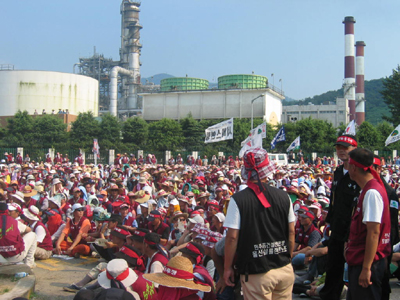 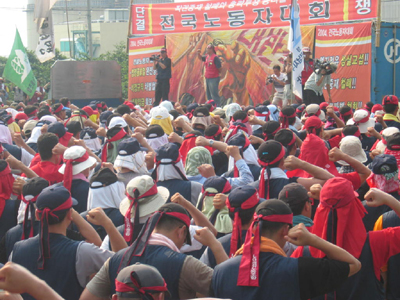 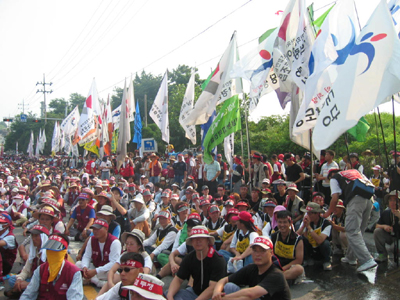 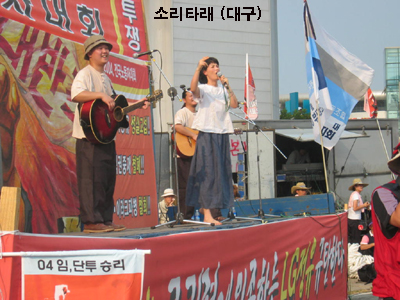 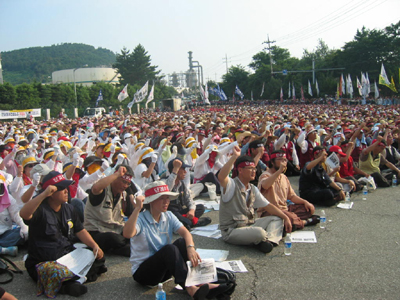 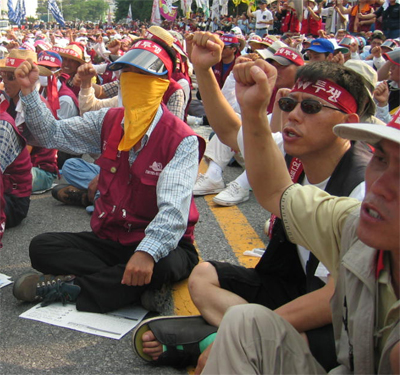 
FREEDOM FOR ALL POLITICAL PRISONERS IN S. KOREA!

WE’VE NOTHING TO LOSE EXCEPT OUR CHAINS!